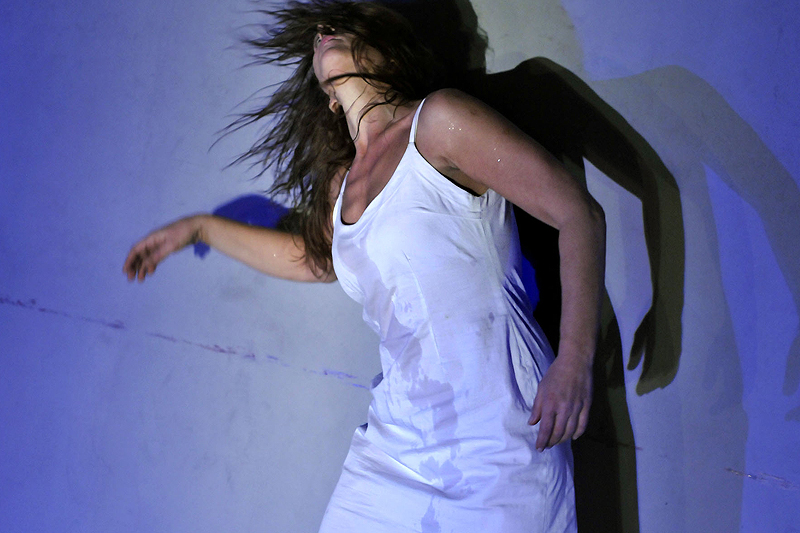 Sea/Woman is about a Woman/performer searching for something indefinable. Uneasy, hemmed in, she dives repeatedly into her text to forget herself and become Her – but surfaces remembering even more. What wreckage is she finding down there?

This performance takes the Serbian word for rehearsals ‘proba’ meaning ‘to test’ or ‘taste’ and the French ‘répétition’ meaning ‘to repeat’ quite literally before your eyes, inviting the spectator to witness a normally private process: the fractured and spiralling dive into conscious and unconscious association as the actor prepares her role. As she tests and repeats the Ibsen text, slipping between her real self and the imaginary she is struggling to represent, she finds both echoes and dissonance within her own life, a relationship with the past and insight into what it might mean ‘to act’.

The collaboration is a convergence of different histories in theatrical research. Our project began as an exploration of age and memory (personal and cultural) and about what to perform – live – how and perhaps why, today. During its development, inspired by Ibsen’s domestic tragedy, our work, inevitably, became haunted by real tragedies of geopolitical disaster and conflict.

”the water is sick”  (Ibsen)… Every year tens of thousands of albatross chicks die from starvation and toxicity, choking on a diet of human trash fed to them by their mothers who cannot access their natural food supply from the sea’s surface.

Sea/Woman has been developed as part of the Arts and Humanities Research Council funded project, ‘Beyond the Linear Narrative: Fractured Narratives in Writing and Performance in the Postcolonial Era’, undertaken by the Goldsmiths, University of London, Pinter Centre for Performance and Creative Writing.

Sea/Woman is performing in the UK and in residency in Beirut, Lebanon sponsored by the British Council, in January 2011. The project continues performed in the UK and internationally from Autumn 2011.